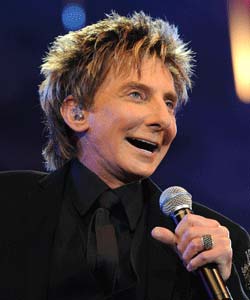 An audience whose ages ranged from 18 to 80 waited with anticipation for one of the great showmen in modern musical times; Barry Manilow

From the moment he took the stage, the audience, armed with red glow sticks, were on their feet. This magical scene set the ambience for the next 2 hours.

With only one of two of his lesser-known songs, Mr Manilow took us on a journey encompassing the last 35 plus years, beautifully supported by a modest group of great musicians and backing singers.

Sitting there, you were reminded of just how many hits he has actually had. Who doesn’t know, Mandy, I Write the Songs, Looks Like We Made it and a personal favourite, Weekend in New England, to name but a few.

He moves slightly awkwardly but his stage presence is undeniable. The voice sounds as great as ever, with every note hit with calculated precision. My friend, a mere 27years of age had to admit that the concert had been one of the greats in his experience. Together with the hoards of life-long adoring fans, we filed out of the Manchester Arena having just experienced something really special.

Highly recommended next time around.

A shout out too for the Arena Team who couldn’t have been more helpful and friendly.