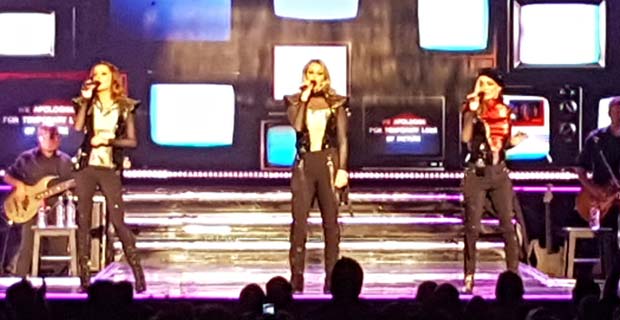 If I told you that a record breaking girl band was back in town, you’d probably reach for the platform trainers and union jack dresses in a fever pitch but stop (right now), it isn’t that one, it’s a band who were flying the flag for Girl Power when the Spices were still in party dresses.

Yes Bananarama, Queens of the 80s, are back on the road for the first time in….well surprisingly enough ever. They have hit the road in other forms, with a replacement member and then as a duo but the original line up of Keren, Sara and Siobhan have never graced us with a tour, until now.

They stormed onto the stage at the Apollo last Friday to their massive hit, Nathan Jones and it was school disco heaven for the next ninety minutes as they pushed through hit after hit. Siobhan was clearly the most fired up to be performing the old songs again, her energy was infectious as she jumped around the stage. That’s not to say Keren and Sara didn’t keep up.

All the hits were there, Robert De Niro’s Waiting, Cruel Summer, Venus and Love In The First Degree, but what is also still there is the accessibility of the group. They come from a time when people could pick up a microphone and declare themselves a band, before they needed huge budgets for videos and tours and social media technicians. The choreography may not be as slick some of the uber trained stage school wannabes out there but the humour is natural and infectious and almost from an innocent time. Yes I am sounding like an old fart.

The show itself relies totally on the music. The video screens are a great accompaniment as are the surprisingly understated costumes. The band know that their back catalogue is what people have come for and we nearly lost our voices with an acapella Na Na Na Hey Hey (Goodbye), or maybe that was just me, sorry to the person next to me.

There is one wonderful surprise song in there, it’s probably not much of a surprise now to be fair but I’m not going to spoil it, as well as some real fan favourites that I never thought I’d see them sing like the massively underrated Cheers Then and Trick Of The Night before we head into more familiar territory led by I Heard A Rumour and I Can’t Help It.

If you missed the show fear not, because they are returning on 6th December to do it all again and I cannot recommend them enough for a no holds barred nostalgia fest.