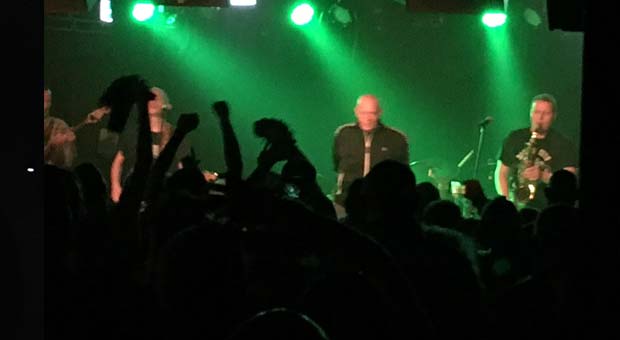 Bad Manners in concert - Our review

First time in Club Academy in the basement of the student union complex. A larger venue than expected, large bar and, surprisingly, a fair amount of seating, for those of us with creaky knees.

TV Smith was supporting. Previously known for being a member of superb punk band The Adverts, he has continued a solo career and is still writing powerful songs with strong social and political commentary. Still dressing like a punk too. We were delighted as both big fans of The Adverts in their heyday. He didn't disappoint, full of energy and that great subversive punk spirit. His solo work is great, with a real message, but we did love it when he did some of the old punk classics. Got to meet him afterwards too.

Bad Manners are the Two Tone/Ska band from the late 70's, still with the original frontman, Buster Bloodvessel , a larger than life character who is still as lively as he was then. A big crowd were there to enjoy themselves singing along even before the band came on!

The band played brilliantly, high energy from the start, classic Ska/Reggae which got everyone going. Lots of people clearly dressed to impress in the Two Tone/Ska style who were absolutely loving it, singing and dancing. Nearly every song was a well remembered old hit and a couple of covers.

A really great evening, knees feeling it the next day though.