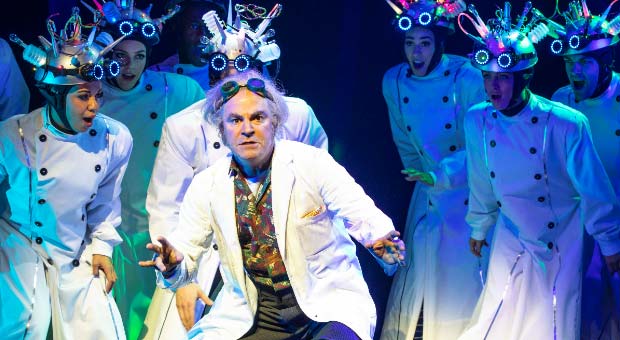 Back to the Future

Back to the Future the Musical

Back to the Future first hit the big screen in 1985 and became an instant hit that spawned two sequels. The iconic film immediately conjures images of DeLorean, clock towers and lightning bolts, and the possibility that time travel might just be possible. 35 years later and the original writers, Robert Zemeckis and Bob Gale, along with original composer Alan Silvestri and lyricist Glen Ballard, have teamed to produce a new version for the stage. These Hollywood A-listers (who took to the stage on press night) have launched Back to the Future the Musical at Manchester’s own Opera House – a mammoth of a creative team with the equally mammoth challenge of getting every detail right for an audience who knows the original so well.

There is an electric atmosphere prior to curtain up – expectation is high and the audience are eager to be immersed in an evening of nostalgia; the stage design explodes across the boxes in a neon fantasy giving the impression we are sitting within a giant video game, or about to embark on a thrill ride at Universal Studios. And, Great Scott, what a thrill ride it is! From start to finish this lavish production hits every mark with top notch production values and a cracking cast.

Olly Dobson leads the way as Marty McFly, the schoolboy sent back in time to 1955, who must find a way back to his 1985 home life. Uncannily resembling Michael J. Fox, he perfectly captures the feel of the original film, with added song and dace thrown in. Roger Bart is hysterical as the mad cap Doc Brown, frantically trying to recreate something he now knows he has created in the future, and who can also deliver a tune or two with a bevvy of chorus boys and girls who appear every time he sings. Rosanna Hyland (Lorraine Baines) causes some incestuously comical moments in her pursuit of new boy in town (and her future son) Marty. But it is Hugh Coles who shines particularly bright with his spookily accurate portrayal of Marty’s father George McFly, down to every mannerism and vocalisation.

Broadway's John Randow (director) and Chris Bailey (choreographer) ensure a slick, seamless production with spot-on dance routines. Tim Hatley’s stunning stage design captures the essence of the 80s and 50s and 100% delivers on all the moments you didn’t think were possible on the stage; the lighting, sound, costumes, wigs and video technology are flawless; and Jim Henson leads the orchestra through the film’s classic hits: The Power of Love, Johnny B Goode, Earth Angel and Back in Time as well as a host of original songs that fit perfectly into the original script.

Destined for the West End, this is an exhilaratingly joyous joyride that will have you grabbing your flux capacitator and rushing at 1.21 gigawatts full throttle to the box office for more – we’ll definitely be heading back to the future.