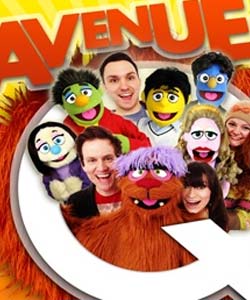 As soon as the curtain went up to reveal the fictional area of New York known as Avenue Q, we knew that we were in for a treat!

Sometimes touring companies can lack the energy and talent of their West End counterpart, this is definitely not the case with this production.

The cast gave an excellent performance of this award winning show, really getting into the characters and making the puppets come to life. For a lot of the cast, this is their first outing since finishing at theatre school, not something you would imagine after seeing them!

As an audience member, you begin to believe these puppets are real and feel their torments in life.

There were a number of times we heard emotion from the audience either when a character faced a sad moment, or hearing quiet boos when the character “Lucy The Slut” tries to take Kate Monster’s Boyfriend away!

They delivered the hilarious x rated script and songs perfectly, having the audience in the palms of their hands.

The team behind South Park and the newly Broadway musical “The Book Of Mormon” break the taboos of musical theatre talking about race, sexual orientation, sexual experiences and real world disasters.

In one of the changes from the original script, George Bush is replaced by Justin Beiber – which got a big laugh from the audience.

This is all teamed with colourful language, which you would not expect from a “Sesame Street” type puppet show….everyone was laughing!

A week is not long enough for this show at The Lowry, so get in quick! Otherwise lets hope its back in the near future.