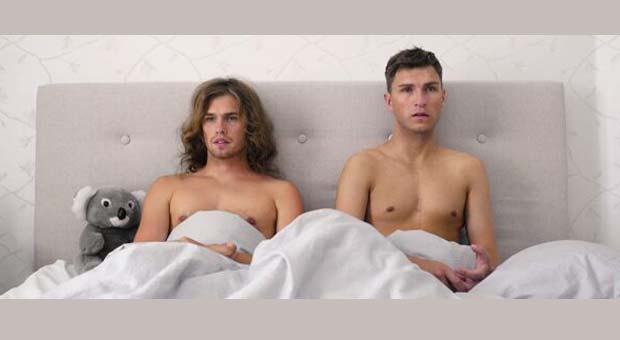 'Are We Lost Forever' - New Release From Peccadillo Pictures

“Many years ago, I wrote a little post-it note that said, ‘A couple is laying in their bed and one partner says to his partner, “I want to get out of this relationship”’ - what happens next?’”, explains writer-director David Färdmar about the origin of his debut feature, Are We Lost Forever.

The Swedish drama, available on DVD, Blu-Ray, and streaming on-demand from Jan 18th (Peccadillo Pictures), follows Adrian (Björn Elgerd) and Hampus (Jonathan Andersson) making sense of their lives, as fiancé’s and individuals, after the latter decides to end their relationship.

Building on his short film No More We, Färdmar creates a tense atmosphere from the outset, with the two men sat in bed discussing the seemingly void future that lays ahead of them. Their lives, it seems, mostly consist of one another’s company, and as the characters begin to reveal themselves to us, it becomes clearer what factors may have contributed to the cessation of the engagement.

What primarily stands out from the film is the lack of self-identity possessed by Adrian and Hampus. Whilst it seems in the first half of the film that neither of them has anyone else besides each other - a troubling level of co-dependence too often romanticised in queer cinema and real life too - we soon find that Hampus is much more social and connected to others than Adrian, with aspirations and desires that reach beyond the insular, intense sphere that Adrian encourages for them.

It is from this intensity that I, as the viewer, felt myself bursting with questions, particularly about Adrian - what was his upbringing like? How does he connect to his identity as gay man? What are his aspirations beyond being so arduously cherished by someone? There is certainly an air that he’ll be forever doomed to have further “unsuccessful” relationships, unless he locates a better sense of self that lives in partnership with another, rather than because of.

Throughout the film, there is a fixation from both men on how to divide or share the objects and possessions that belong to them as a couple. Their bed serves as the strongest metaphor, with discussions evolving into shouting matches the more they begin to drift apart. Färdmar included this after going through two breakups of his own - “A lot of couples start to argue about the material things, but it’s all symbolic”. This lived experience certainly shines through, though some scenes can feel slow as so much of the film’s power lives in what goes unsaid.

The film’s denouement feels somewhat full circle with both characters poised for a better, or at least healthier, future, though those who dislike open endings may be left frustrated at the ambiguity and have to discuss their theories about what came next for Adrian and Hampus over post-film drinks.