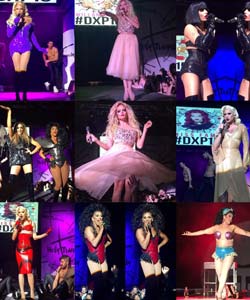 Another great line up for Holy Trannity

It was the biggest Holy Trannity event since the beginning of the year when we saw Rupaul's Drag Race - Battle of the Seasons... and it certainly lived up to its expectations and more!

With 20 of the UK's favourite drag queens and 6 queens from Rupaul's Drag Race, it was never going to be a small event.

If you were queuing up outside O2 Ritz, you couldn't miss Willam Belli handing out free Magnum ice creams in this rainy November evening.

Our hosts for the evening were our very own #Manchester Queen Divina De Campo, Joe Black from Brighton and Charlie Hides from London.

The evening kicked off with our 20 UK queens providing lively and energetic performances.

The UK acts were:

We were then introduced to the Rupaul's Drag Race season 5 queen, Alyssa Edwards as part of the Haus of Edwards.

She showed us she's got hot dance moves and can still do that legendary splits jump, before Laganja Estranja and Shangela joined her to complete their act.

She saw a glimpse of the audience earlier in the day when she pained fellow queen Willam Belli at the 'Makeup Tutorial'.

She sang three of her hit singles, including my favourite 'Rubber Doll', whilst looking stunning in each outfit she wore.

Season 6 queen and Miss Congeniality, Bendelacreme was next to impress.

From nipple tassels to Ariel from 'The Little Mermaid she made us laugh and cheer. The fan favourite from Rupaul's Drag Race reminded us why she was voted Miss Congeniality - utterly brilliant.

We all waited eagerly for the only Drag Race queen to be disqualified from the show - Willam Belli.

She came on at the end of the show dressed to impressed and finished wearing a pair of Louboutin's. Every Drag Race fan will have heard of her hit singles, such as 'This Boy Is A Bottom' and she performed perfectly to a tee.

Willam also demonstrated how drag queens 'tuck' themselves, with the help of a male friend. (For those of you that aren't aware - tucking is how a drag queen hides their manhood). I think it's safe to say it definitely got the audiences' attention.

When the show sadly came to an end, Holy Trannity announced there will be a #DXP16 event in the upcoming future.

You definitely won't want to miss it!