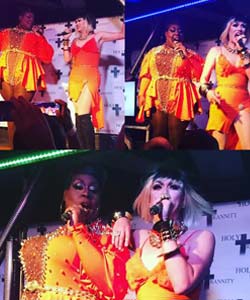 Another great hit for Holy Trannity

Holy Trannity and AXM once again pulled off a fantastic show when Latrice Royale and Manilla Luzon came to town. Of all the Queens that have ever graced Rupaul these two have always been my favourites so I had a great deal of anticipation for this event and I am so happy to say that they did not disappoint. In fact of all Holy Trannity shows I've even seen this was in my opinion the best.

The night had a really great atmosphere about it, the club was absolutely rammed and we were entertained from start to finish. The evening started off with the ever hilarious and brilliant pre entertainment from the Holy Trannity girls, Divina De Campo, Cherry Pop and Ginger Hunter who are as sharp as ever with three great acts to get the crowd warmed up for the main event.

With the pre-show entertainment out of the way the Queens that everyone has been waiting for finally come to the stage with the large than life Latrice Royale who without a doubt smashed it, it's so easy to see why she is the people's favourite of Season 4 of Drag Race. And then of course there is the fabulous Manila Luzon, she is utterly stunning, she can sing, dance, do comedy. She is absolute all rounder. And when the two did song that we all know and love, The Chop, everyone was singing along and taking part.

This change of format totally worked, you could just sit down, chill out with drinks and of course Manila and Latrice who were so friendly and down to the earth. They had time for everyone who showed up, you could not fault them, they ensured that every single person who wanted to see them could. I cannot say enough positive things about how the night played out.

It was wonderfully organised and as I said this was favourite Holy Trannity I have ever seen, without a doubt I would recommend everyone coming to see these shows when they are on. The change of format really works and I cannot wait to attend my next meet and greet with the Queens. Well done AXM and Holy Trannity, you've pulled it off again.