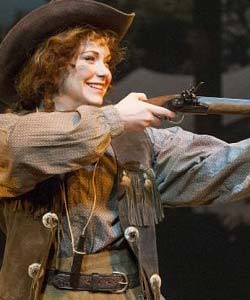 Annie get your Gun

Tuesday evening and your Canal Street Correspondent found himself transported to Buffalo Bill's Wild West show, attending a new touring production of “Annie Get Your Gun” The musical with lyrics and music by Irving Berlin and a book by Dorothy and Herbert Fields tells a fictionalized version of the life of Annie Oakley (1860–1926), a sharpshooter who starred in Buffalo Bill's Wild West show, and her romance with sharpshooter Frank Butler.

The score contains many very well-known numbers including "There's No Business Like Show Business", "Doin' What Comes Natur'lly", "You Can't Get a Man with a Gun", "They Say It's Wonderful", and "Anything You Can Do." It is this song which sums up this production.

The song is a duet between Emma Williams (a glittering Annie Oakley) and Jason Donovan (a feeble and imperceptible Frank Butler). Donovan is at times barely audible; Williams sings and acts the ex-neighbours teen idol off the stage. Dermot Canavan plays Foster Wilson with great comic timing. Norman Pace is an effective narrator/guide as Buffalo Bill, Kara Lane has a belter of a voice as Dolly Tate, and Lorna Want's (Winnie Tate) vocals are as soothing as honey.

Although this is a new production, the overall feel remained very traditional. The choreography was crisp, but uninspiring. The Ensemble sang well and added a degree of showbiz glam, to an otherwise sparse circus set. But the night belongs to Williams, she is proof that while TV stars may get people to buy tickets, it is musical theatre professional that keep you gripped to your seat as she's simply "Doin' What Comes Natur'lly".

The show is worth seeing for her alone. Annie Get Your Gun is at the Manchester Opera House until 24 May and is touring the UK.