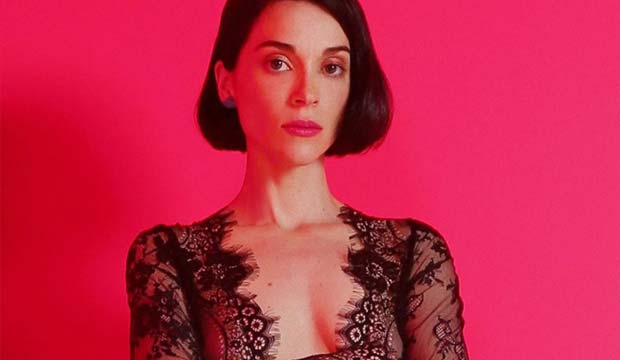 Musician and songwriter Annie Clark - aka St. Vincent - is one of the most distinctive artistic voices and arrestingly original guitarists of her generation. Her album, the self-titled St. Vincent, won her "album of the year" designations from the NME, the Guardian, and Entertainment Weekly.

She appeared live in Manchester this week and we were there..

St. Vincent has never been one to play it safe, or indeed make perfect sense. She has been regularly likened to Bowie, which despite its laziness (why the need to always have to compare female artists to someone), is not without flattery. Her new album MASSEDUCTION is both ambiguous in meaning and social/political relevance. It is also a tour de force of huge beats, wit with a wink, heartbreak, and even some disco funk thrown in – more on this album later.

When an artist’s ‘support act’ is a short, self-directed film, you probably realise that the evening is going to be massively conceptual, self-indulgent but undoubtedly unique… Annie doesn’t fail on this front. The film in question is ‘The Birthday Party’, Annie’s contribution to ‘XX’, a four part anthology of female directed short films. Comparisons to Lynch and Pinter are not unfounded but mostly it’s people dressed as pandas, prawns and toilets, while calm hysteria meets the macabre. Basically it’s weird as hell but we expected nothing less. We clap, smile and look slightly baffled while we anticipate the main show.

Annie arrives for the first act, stage left, under subtle torch light, opening with ‘Marry Me’, our first introduction to the mysterious Johnny character that features on every LP. She is dressed in hot pink space PVC and some equally pink FMBs (urban dictionary for definition). We are then introduced to the first of possibly 15-18 rainbow coloured guitars for the evening, and Annie shifts slightly to centre stage, with some careful lighting and curtain tweaking. We slowly begin to see the concept here, with her change of position for each track in Act 1, and realise that we are not going to be getting a live band, but instead a backing track with Annie and her guitar commanding the stage. Act 1 itself is a ‘greatest hits tour’ of her first four albums, chronologically. Personal highlights are the opening track and ‘Cruel’ from her third album, ‘Strange Mercy’, the title track of which is performed sprawled on the stage floor, with nothing but a spotlight – of course. The crowd however fully respond when the three ‘big’ tracks from her last, hugely acclaimed eponymous album, are performed (‘Digital Witness, ‘Rattlesnake’ and ‘Birth in Reverse’).

Act 2 is a full performance of the aforementioned new album. The stage welcomes back the visuals and Annie returns with a Silver Nemesis looking outfit. She is also on a central podium, much closer to us now, with new guitars in tow. We still have no live band, but we do not miss them mostly, as Annie continues to captivate us, as do the accompanying visuals for each track. The title track gets a huge thumbs up, and leaves us wanting to be greedy, cake devouring capitalists. ‘Sugarboy’ fully explodes and shows us amazing things can happen when you work with Taylor Swift’s producer. ‘Los Ageless’ (a contender for song of the year), correlates directly to ‘MASSEDUCTION’, and is a huge highlight. ‘New York’ is stunningly raw in its simplicity, as is our second visit to Johnny on ‘Happy Birthday, Johnny’. Annie shows us why she is dubbed a ‘guitar genius’ on ‘Saviour’ - somewhere Hendrix is smiling down (I am a victim of the above comparison bug). We end with the delicate but disturbing ‘Smoking Section’ and we realise that the evening has flown by, such was Annie’s grip on us.

Of course we are not to get anything of an encore as it simply wouldn’t fit into the contrived conceptualism of the whole show, but this is not a negative. The entire evening is brave, original and of course indulgent. It takes a confident performer at the height of their game, to be willing to command the stage and crowd armed only with an instrument. Annie doesn’t interact with us so much in the traditional sense but she speaks to us throughout via her act – we don’t even crave empty words of appreciation. We understand what she is trying to tell us. At least we think we do.

An outstanding but at times difficult show, which will no doubt give some performers a kick up the ass, much like Annie invites us to almost kiss her ass on the sleeve for ‘MASSEDUCTION’. The lighting was some of the best ever seen, and worked beautifully with every gesture, beat and strum. The stage hands need a mention as they were stealthier than ninjas, swapping guitars/mics/positions for each track. This show could also not have been at any other venue, such was the simple theatricality of it.

You could hear a pin drop at times, which just proved how enthralled we were. And possibly confused. It won’t be for everyone but we can’t wait to see what St. Vincent does next.