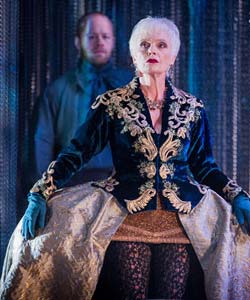 Andrea Chenier opera at The Lowry

Readers will probably remember Tom Hanks’ performance of ‘La Mamma Morta’ in the 1993 film Philadelphia. Tom Hanks performs his pas-de-deux with his hospital drip as Maria Callas sings one of the most poignant Arias from Umberto Giordano’s 1896 opera.

Based on the life of the poet Andrea Chenier, the opera is a passionate love story between Chenier (Rafeal Rojas) and Maddalena di Coigny (Annemarie Kremer). A love story based on conviction and sacrifice, set against the backdrop of the French Revolution.

In a post Les Miserables world, it is easy for us to become familiar with the vivid characters and range of emotions from the French Revolution. But what is striking is that Giordano clearly felt this too as he demonstrates an understanding of how to use music and drama to bring these characters to life.

Throughout the opera, Rojas does not disappoint with his passionate delivery, taking us from lyrical pity to the height of anger. You truly believe in the cause Chenier believes in and Rojas brings to the forefront some of the most lyric-dramatic music ever written for the tenor voice. Kremer and her glittering beauty of register brings Maddalena to life with superb ease and when Rojas and Kremer perform together their on stage chemistry heightens the emotions to an extreme that is truly impressive. Robert Haywood (Carlo Gerard) deserves a significant mention here to, as he underpins the story with a clarity and ease throughout the opera.

Opera North’s staging is just as dramatic, with a stark and heavy approach to the set being encapsulated within a chain link curtain. The orchestra keep us on the edge of our seats, sounding sublime under the direction of Oliver von Dohnanyi. The enthusiastic reception at the end was richly deserved.

For more about whats coming to The Lowry