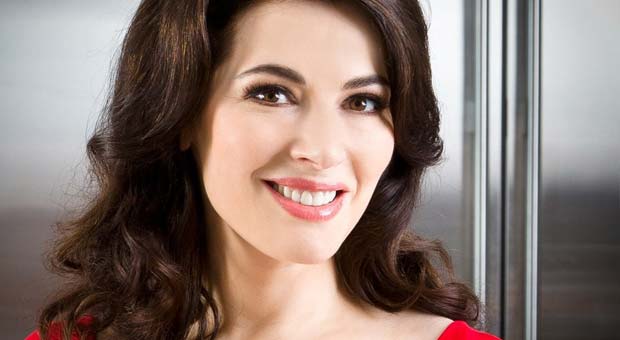 An afternoon with Nigella at The lowry

Nigella returns to the City (well this time it’s technically Salford) on the 20th Anniversary Tour of her very first book, How To Eat. Food writer Bee Wilson has the honours to interview and welcomes Nigella on stage to a packed Lyric Theatre at The Lowry. Nigella beaming as always is on trend in animal print and some classic Louboutins. Most of the crowd have a sensible (alcoholic) drink in their hands and are ready to spend a Sunday afternoon in good company.

How To Eat really was an influential piece of writing and not only in a culinary way. Bee, like myself admits that she has worn out a couple of copies of the book. What was so great about Nigella’s debut book was that it wasn’t a dictated guide to kitchen prowess or how one must cook/buy food but instead an accessible and joyous aid to become more competent and confident in the heart of the home. This catered for all even if skill, time and budget might have been limited. It also set the tone and the ‘Nigella voice’ we have grown to know and love: it’s as familiar and fragrant as those sounds and smells she tells us she loves in the kitchen from zesting and squeezing a citrus fruit to sautéing an onion.

The voice as per usual is warm, well-articulated and typically drowning in superfluous adjectives! Her style has never been especially succinct or rehearsed (thankfully) and she really does go around the hills to make a point, but there is such genuine passion in each anecdote that it never becomes tedious. Nigella would be a great alternative to Joanna Lumley on those pointless but joyful travel documentaries perhaps? “Extraordinary”!

Bee Wilson is clearly a huge fan and dare I say she is pretty much fan-girling Nigella (who wouldn’t?) during the 2 hours. Her own writing has been influenced by Nigella’s and was no doubt a breath of fresh air from the ‘cheffy’ cook books that are discussed: Nigella couldn’t be prouder not be a chef but instead a very happy home cook. On a couple of occasions she actually defers to Bee as more the food expert as she reiterates that she is not a trained cook, nor an expert and that food is subjective.

It is fascinating how quickly How To Eat was written – 6 weeks! Of course most of the recipes has been carefully and thoroughly tested but even so the size and depth of the book is so impressive that it shows what a natural writer Nigella has always been. Certainly I am personally guilty of often enjoying the prose and the stories more than some of the recipes over the years. Speaking of recipes, Nigella says they are often no more than a guide and that there is mostly scope for a personal touch (available ingredients for example) but that recipes do have to work, so she tries to be concise within a small range so that for the sake of 25g, no one rushes to the shops. Of course with baking precision nearly always has to be key. Damned science.

Some familiar tropes (from these conversational tours) are re-visited such as healthy eating and dietary requirements. In terms of both, Nigella admits she is not the best person to guide on this but in regards to so-called ‘clean’ eating, surely balance is best, rather than depriving yourself for the sake of ever changing fads. With the latter, she does say she has gotten better at providing gluten free or vegan recipes, but that they are usually unintentional and again she wouldn’t always be able to provide a good alternative solution. She also reminds us that her mother would be horrified at how frivolous she is with food shopping but that she is never wasteful. The Monday fridge forage is a highlight in the Lawson kitchen before making way for the Tuesday Ocado ‘big shop’.

Perfection and her disdain with it is also touched on. Nigella believes perfection dull and unlike trained chefs, home cooks are privileged to have the freedom to alter and adjust (or mess up and learn) at their will – no factory line pressure here. Imperfection should be embraced and a broken, sunken cake can be disguised with nuts or berries (I won’t mention my nut allergy then) she advises with a wink.

Question time, which was the second half of the afternoon was a mixed bag and possibly went on too long. I did get the first question, so maybe I should feel pretty content. Audience questions ranged from what they should feed their fussy kids to one woman embarrassingly fawning over Nigella and then trying to sell her some homemade products. Bee thankfully moves it along before it gets too awkward. My favourite question was about a possible last ever meal. Nigella responds that it would include Nigel Slater’s wildcard sausage and oyster recipe, a clam linguine, a whole roast chicken, 2 types of spud (no boiled, phew) and a passionfruit pavlova to finish. Certainly a full answer…

A lovely afternoon all in all which might have delved a little more into Nigella’s personal life (not in a crude way) but still flowed nicely in the main. As mentioned, an entire half devoted to audience questions was a tad too much and I might have enjoyed listening to more stories from Italy (when she worked as a chamber maid), recent travels to India and Sri Lanka, or possibly to briefly touch on Anthony Bourdain’s recent death. He was certainly a huge influence to Nigella as was Anna Del Conte: the latter not mentioned at all.

It is lovely to see someone doing what they love and even though it’s been a great 20 years for fans of Nigella, there is no indication that it is ready to come to an end. We look forward to the next 20. Happy anniversary.