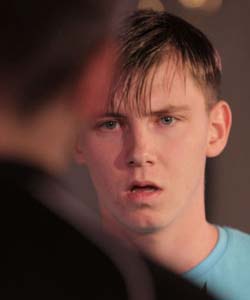 This is the second time that I've seen this play. The first time was when it was first shown as part of the 24:7 theatre festival last summer, when it won the Audience Award for Favourite Show and Equity's Vicky Allen Memorial Award for Best Play. I understand it's just been nominated for a couple of Manchester Theatre Awards too.

The fact that this is the second time that I've seen the play says everything about my own recommendation of it. I never see a play twice! And I mean NEVER - until now.
A tightly written 3 hander, this production is wonderfully directed by Martha Simon, who took the brave decision to dispense with any set or props and rely simply on the quality of Ian Townsend's writing to shine through.

And shine it does. From the moment the play starts I'm smiling and although it can't strictly be described as a comedy I pretty much continue to smile for the next 55 minutes or so ('cause that's how long the play is). It's a difficult piece to describe without giving away too much, but suffice to say that we have three riveting performances from the actors, Dominic Vulliamy, Thomas McGarva and Daniel McCann.

Ben might be described as a bit of a loser, but he has a big heart and treats his half brother, Henry, who has 'special needs' with all the love and respect that anyone would want. Unfortunately Henry can't allow himself to get too close to Ben in case he catches 'the gay disease'..... but already I think I'm giving too much away - this is not 'a gay play', or 'a special needs play' or an anything play really and the best I can do is to describe how it made me feel.

I've always been a fan of that cliché of going on an emotional roller coaster at the theatre and it's not often that I find myself on one, but tonight I find myself laughing on many occasions and trying to hide the fact that my eyes are welling up on others. As the play finishes I notice other people trying not to show how much such a simple story has affected them too - a piece that is so life affirming and uplifting it actually does make you feel good to be alive.

I wonder why it is that we feel the need to hide those emotions that we also crave so much? Surely it's not just because we're so bloody British?! I don’t know - but I give this play a ten! See it if you can - it's only on until Saturday.