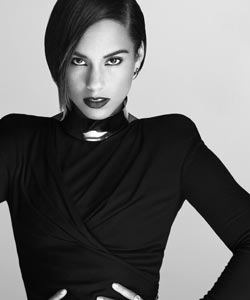 Manchester Cathedral has well and truly embraced the 21st Century and in the last year or so has become a choice venue for pretty big name musical acts and bands: non so far with a bigger profile than last night’s performer, Ms Alicia Keys.
This was not a traditional gig, as the night was hosted by MTV (part of their ‘MTV Crashes’ season) being a showcase for press and competition winners only. The venue speaks for itself: stunning and legendary. Based on tonight’s performance Alicia Keys is certainly the former and destined for the latter.

She looks terrific: the 90’s Whitney bob is back! Motherhood has done her no harm obviously and her down to earth approach is appreciated by the crowd as is her pro Manchester attitude and weather teasing jibes.

She opens with a new track, New Day from her upcoming album Girl On Fire, which is a bit new age, ghetto ‘mom’, but very uplifting. The set is heavy with hits: Try Sleeping With A Broken Heart, You Don’t Know My Name, If I Ain’t Got You and the title track of the new album. The biggest cheers are reserved undoubtedly for Empire State Of Mind and the song that started it all, Fallin’. The voice under these acoustics is hugely powerful, yet still brilliantly raw. The band, particularly the backing singers need a huge mention.

Ms Keys held the crowd in the palm of her hands and deserved the rapturous send off. The supporting artist, Lianne La Havas needs a mention too: a beautiful London girl with a Greek and Jamaican heritage. Lianne was a revelation with a fantastic voice who’s just been nominated for the Mercury Music Prize. She did a little acoustic set which captured the crowd who’d probably never heard of her. Best of luck to her.

Alicia Keys however, was the star and shows no signs of slowing down. The gig will be televised on MTV at the end of October.