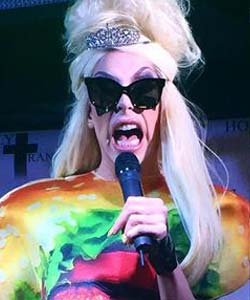 The night kicked off with our very own #ManchesterQueens from Holy Trannity - Divina De Campo, Cherry Pop and Ginger Hunter.

They provided a ghoulish Halloween performance with their comedy miming acts, dancing and live singing from Divina.

Afterwards we were warmed up for Alaska by Divina again our DJ for the night. She played various songs from past Rupaul's Drag Race queens to get the eager crowd going...

Shortly afterwards, Alaska made her appearance wearing a large purple cape, revealing her new new found 'daughter'. Turns out, one of her fans and a fellow Canal Street Instagram follower @m.a.x.well gave Alaska a doll with with perfectly groomed drag eyebrows a matching blonde wig... like mother, like daughter as the saying goes!

She performed some of her new singles from her album 'ANUS' such as 'Your Makeup Is Terrible' and 'This Is My Hair, I Don't Wear Wigs'.

We saw her then change into her Halloween costume, which was a giant burger outfit. To then cutting herself out of it with a pair of scissors and cutting a lock of her hair and throwing it into the crowd!

She got the crowd cheering her on as the show drew to a close, she demanded to stay on stage and didn't want to leave.

She insisted our DJ Divina to play just one more song. After a think, she requested a song from non-other than Rupaul herself.

She sang and danced to the season six song 'Sissy That Walk'. Ending the night and weekend on a high as it should have been.