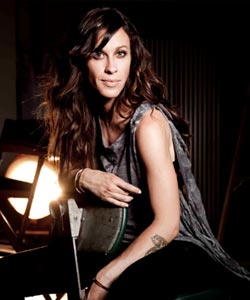 Despite the sell out Guardian Angel Tour being in its final days in Europe, Alanis put in a highly charged energetic performance at the Echo Arena in Liverpool on Friday, 30th November.  An early appearance to perform on stage with rapper Mario “MC Souleye” Treadway’s, who was the  supporting act for her tour, was a real crowd pleaser for those who arrived at the venue early.

With her own set list crafting a careful balance between nostalgia and songs from her latest album, Havoc and Bright Lights, Alanis couldn’t fail to please the crowd.  With such and extensive repertoire of hits, Alanis has just so much to offer in a live environment and it is very evident she is an artist who really enjoys performing her songs in front of an audience.

It has been four years since her last album, Favours Of Entanglement and a lot has happened in that time, in 2010 she married Mario Treadway, who is also on tour with her, and last year the couple had a child together.  Her new album, Havoc and Bright Lights really reflects a new found maturity in her music and the song Guardian allows an insight into her changed personal priorities as she promises to look after a special person.

Alanis’s energetic delivery and a blend of fresh sounds made even the older, somewhat angst and angry songs, feel rejuvenated.  The up-beat mood seemed to reflect Alanis’s happier personal experiences which are almost certainly influencing and positively impacting her work.  She has come along way since the angst days of Jagged Little Pill and Havoc and Bright Lights definitely chronicles a new chapter in the artists life.

Going from a highly charged and energised rock performance to a calm and intimate acoustic set as the finale featuring “Hand In My Pocket” and “Thank U”, not only gave the audience a well rounded experience of Alanis’s music but also of her vocal range and versatility.

Whilst it is unlikely that the Havoc and Bright Lights album will reach the same heights of the Jagged Little Pill album, it is definitely worth a listen, although I don’t think anything can compare to seeing this artist live.