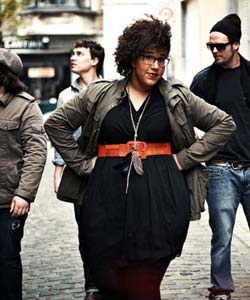 Alabama Shakes is an American rock band formed in Athens, Alabama, in 2009. The group consists of lead singer and guitarist Brittany Howard, guitarist Heath Fogg, bassist Zac Cockrell, keyboard player Ben Tanner, and drummer Steve Johnson and not much more information is known about them.

Since their arrival on the world music scene in 2009,the critical and sales success of 2 albums has given them a large and loyal following.

This was clearly evident at Manchesters's O2 Apollo last night.

A packed Apollo was buzzing with excitement in anticipation of their arrival on stage which it has to be said was some 15 later than scheduled (a growing trend it seems at concerts these days)but they were not be disappointed.

The enigmatic Brittany Howard is that rare thing in modern music.Unique.She dominates the stage,gently prowling around whilst engaging with the audience at intervals, with some playful banter.Then there is the voice....

Etta James to Janis Joplin,the comparisons are numerous,mainly because this incredible instrument has such power and range,that every song she sings draws on different aspects of her voice.Brittany is also a great guitarist and together with her fellow band members 'jammed'together to tremendous effect.

The set of original songs combined,elements of soul,blues,rock and gospel,were all very eclectic.Variations in both tempo and rhythym often 'fooled' the audience, as to  exactly when a song was finished.Only the truly faithful really knew.

Carefully choreographed lighting also added to the spectacle throughout the set,adding atmosphere and an intimacy to the proceedings.

As a first timer to Alabama Shakes,we were left feeling that we had witnessed something really special and genuinely wanted more (at just 80 mins it was unfortunately too short )and we were left with just the new album 'Sound & Colour'to entertain us on the way home.