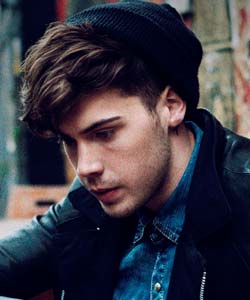 Coming 9th on X Factor two years ago is nothing to write home about unfortunately, but it did Aiden Grimshaw no harm. The awkward Northern boy with soul in his voice would never have fitted into the conveyor belt produce of The X Factor. Instead he’s spent two years writing and recording the album he wanted to with respected producer Jarrad Rogers. Massive commercial success hasn’t come, but definitely a big, loyal following judging by this sell out gig at Manchester Academy 3: a great, intimate venue. But does he cut it live?

It seems that in those two years, Aiden has honed the awkwardness into brilliant stage presence without losing any personality or originality. He is not 100% well tonight as he explains before apologising, and is armed with a very rock ‘n’ roll cup of tea, sorry brew, but the voice is strong, especially on the top notes.

The falsetto misses once or twice, but we forgive that tonight, but we don’t forgive the constant use of reverb, which we know is unnecessary as when singing acoustically, he is at his best. Looking buff and not uneasy on the eye, Mr Grimshaw works his way through the album chronologically, which he tells us is intentional.
The crowd is made up of women of all ages and all of them know every word (we do too, but are too ‘cool’ to admit this obviously!) and the few blokes in the crowd stand out like sore thumbs, but we don’t mind. The performance is very mature and the banter is soaked up by the very vocal ladies in the crowd (and the token boys).

Not doing better on ‘that’ show was probably the best thing to happen to Aiden. Simon Cowell is actually still involved record company wise but musically there is no influence luckily! The mainstream success probably won’t come, but gigs like this and more albums hopefully will: thank you Dannii Minogue for giving Aiden an initial chance back in 2010.