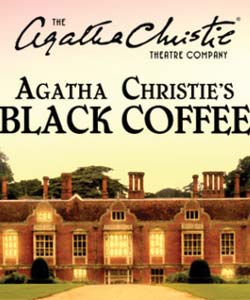 Mystery, Misdirection, Murderous Intent and several Red Herrings await you in this new production of Agatha Christie’s Black Coffee at the Opera House Manchester. The play is presented by the Agatha Christie Theatre Company and Jason Durr plays the eponymous Hercule Poiriot.

This is Christie’s first play and it is reported that the reason for writing it was because of her dismay at the portrayal of Poirot in adaption’s of her books by other people. This play was to establish the sound, look and feel of the Belgian Detective.

In our modern times it can be difficult to move away from David Suchets impeccable delivery of the role over the last 20 years. However, Durr delivers a very convincing, if at sometimes a little playful, depiction of the famous Poirot.

The story concerns one Sir Claud Amory, who is an inventor, and his latest discovery in nuclear physics. Set in Sir Claud’s home the characters, the family, employees and a guest, are retiring to the withdrawing room following the evening meal.

However, things are not as they seem as they soon discover finding themselves ‘locked’ in. Sir Claud makes an announcement about what is about to happen and he explains that part of his research was stolen, earlier that evening, and that the only people who could have taken it are present.

It is from this point that the story unfolds and becomes the classic ‘Who Done It?’. Can you solve what happens before the big reveal?

The story is set at the end of the 1920’s and the single stage set is an Art Deco feast complete with large French windows, high ceilings, cubism art, stylised furniture and connecting doors with large glass panes.

The play is classic Christie and for those who have seen or read and enjoyed any of the Poirot stories you will not be disappointed.