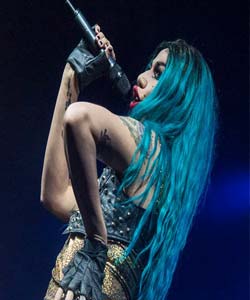 Adore jetted into Manchester to help HolyTrannity celebrate their first Birthday at The Ritz and at AXM for the after party .

We were there on the night....

''From the main stage of Holy Trannity's first birthday whe are enjoying  incredible night of entertainment.

As we've come to expect from Holy Trannity the quality is always second to none. Tonight brought everything a fan of Rupaul and Holy Trannity would expect, dancing, singing and comedy all in abundance.

With a fantastic warm up performance from the ever delightful Divina De Campo, we were further spoilt tonight with a hilarious comedy act from Ginger Minj who had us all in stiches.

Then of course, we were treated to the one and only Adore Delano, who gave us a huge number of songs, many of which hadnt been yet heard, from her new album.

The atmosphere tonight was absolutely electric and I for one could have stayed all night but With work tomorrow,i wasnt able to.

We're so lucky in Manchester to have Holy Trannity, AXM and the brilliant event organiser Paul McAvoy, to bring us a constant flow of fantastic entertainment from across the pond.

The stars of Rupaul have really put Manchester on the map (with more planned) as a place for drag entertainment of the very highest standard.

The Ritz is always the perfect venue to house the incredible talent from some of our favourite drag queens,with AXM again housing the after party and the 'Meet n Greet' with Adore.Both venues were packed to the rafters.

A fantastic event and looking forward to much more to come''.