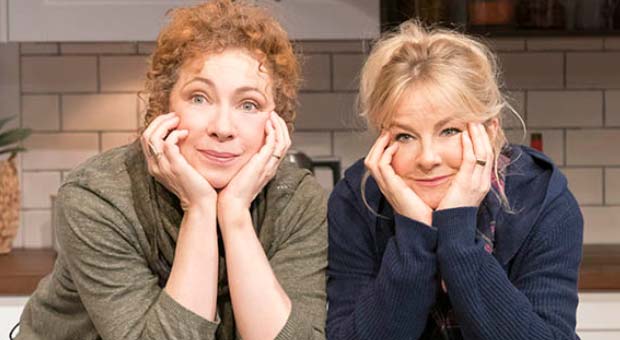 Admissions at The Lowry

Sherri Rosen-Mason is the Head of Admissions at a private US school. She has a personal goal to improve the percentage of non-white students coming into the school and makes her voice known to everyone who will (or won’t) listen. Her current challenge is the new school prospectus, in which she forcefully makes her views on the lack of black children being portrayed known to long suffering colleague Roberta.

A few months later she faces a personal dilemma when her high-performing son, Charlie, has his application to Yale deferred, but her best friend’s son successfully gains a place. Perry is not as strong athletically or academically, but he is black. Through this premise, Joshua Harmon’s award-winning play challenges the issue of diversity quotas discriminating against intelligence.

Directed by Daniel Aukin, this is a pacey production – at times so fast that it is difficult to understand what is being said, with the strong accents and emotional delivery not helping the clarity. Alex Kingston (Sherri) and Sarah Hadland (best friend Ginnie) are impressive names to lead the cast, but the overall piece is very static and would probably work better as a radio play.

Ben Edelman (Charlie) conveys teenage angst mainly at a level of shout; his long monologue particularly challenging to sit through. Described as bitingly funny, sadly the humour passed me by. The premise is good, but this was an overlong evening that involved a lot of shouting and never really went anywhere.