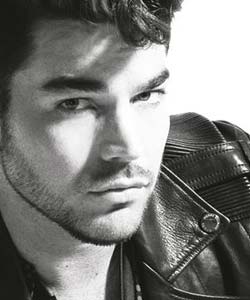 I am here for your entertainment perfectly sums up Adam Lambert.This is my third time seeing him live and his concerts are always full of energy and he puts his best effort forward each time.

Adam truly is an all round entertainer and its perfectly obvious that he loves to sing and is able to translate this love to a packed audience.

Last night at The Academy (the perfect venue for this gig) Adam showed us a great maturity to his live performance, with a slick,quirky and ultimately hugely entertaining spectacular.

With sales approaching 3m albums and over 5m singles, Adam Lambert has certainly made his mark on the pop world with his combination of soaring, high vocals and carefully chosen collaborations with Pink,Nile Edwards and Gaga et al.

Rising Brit stars Lawson did a superb job of opening the show and by the time they left the stage with their best known hit to date 'Juliet' the crammed to the rafters crowd was duly 'warmed' and eager for the main arrival.

At a slightly tardy 9.20pm Adam and his tight troupe of 2 dancers and excellent musicians, took to the stage supported by some wonderful visuals which were to be a massive feature of the couple of hours ahead.

The very high tech visuals, so often associated with his videos, were a constant through the performance, which when coupled with some tight, fun choreography provided a visual feast for a now frenzied audience.

And what of that audience?

Diverse would be an understatement.All ages and races and VERY LGBT.Well aware of his fan base, Adam revelled in his camp references and flirty chat and appeared very comfortable with the whole live engagement in Manchester, the gayest of cities.

There were costumes changes too from Red Leather and trademark black gloves, to a smarter fitted light coloured suit through to the high campy Zebra styled creation.All were much admired and complemented the whole visual experience.

Comparisons are always a part of any live artists and in Adam's case its the likes of Freddie Mercury and George Michael.Not a bad pair really?? Huge compliment really?

What really stands Adam Lambert apart from the plethora of other younger performers of the last 7 years is simply that he has the most exceptional voice and he CAN replicate his recordings live.He also visibly revells in his talent, which becomes somewhat infectious after a short time in his presence.

Musical highlights of the evening included 'Ghost', Mad World (Tears for fears classic), his own take on Bowie's 'Lets Dance' and of course 'For Your Entertainment'.

Personal fav on the night for me was 'Whataya Want From'.One of the early global hits.

My friend who accompanied me on the night, admitted to not being that much of a fan before this gig, she is now however and commented that she had rarely seen such an enthusiastic merging of Perfomer and audience.

The sea of smartphone screens throughout the gig, were clear evidence of this.

Another friend, who wasnt with us, would undoubtedly have remarked on Adam's performance by remarking 'She's a camp do'..

To keep up to date about Adam.Click here.