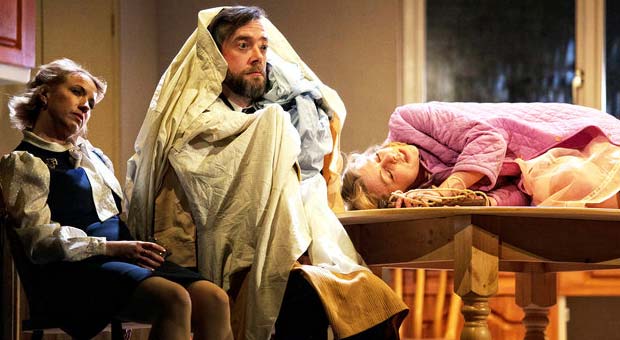 Absurd Person Singular, by Alan Ayckbourn, opened at Oldham Coliseum on March 10th. It charts the ups and downs of three married couples over three successive Christmases and how they perceive each other socially.

Struggling builder Sidney and wife Jane (Paul Sandys and Felicity Houlebrooke) host a Christmas party to suck up to architect Geoffrey and wife Eva (John Dorney and Helen Keeley) and bank manager Ronald and wife Marion (Graham O’Mara and Rosana Miles). In Act 2, a year later, Geoffrey and Helen are the hosts. Act 3 completes things after another year, with Ronald and Marion hosting. As Sidney’s fortunes improve over the intervening years the other couples’ lives collapse, and,  without giving too much away, the motto is that if you’re nasty to people they’ll probably be nasty back.

The play was first performed 48 years ago in 1972 and it’s always fascinating to see if a play still works or if it’s become a period piece. The subject matter is timeless – everyone of all ages suffers the slings and arrows of outrageous fortune, even if the shots are sometimes of their own making. In the event we were temporarily transported back to the 1970s, but the play is showing its age a bit and a reworking to bring it up to date would be interesting to see.

That said, the comedy is as good as ever. In Act 1 it’s Sidney and Jane’s wooden eagerness to please, and Helen’s over the top condescending insincerity, that bring the most laughs. In Act 2 there are darker moments where we really shouldn’t be laughing at Eva but it’s hard not to. When Act 3 ends, it’s also hard not to enjoy Ronald’s and Geoffrey’s comeuppances, and Sidney’s turning of the tables on them is masterful. He who pays the piper, or in this case holds the Roberts Radio, really does call the tune.

All in all this is a good revival. It’s well acted with nicely sharp deliveries, and with a bit of 70’s nostalgia thrown in.

Absurd Person Singular continues at Oldham Coliseum until the 14th before continuing its tour.