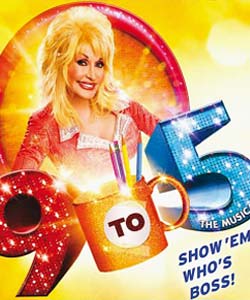 Your Canal Street Correspondent was whisked off to the 1980’s and corporate America (well actually Manchester’s Opera House Theatre) on Tuesday night for a Manchester Pride Fringe performance of  “9 to 5: The Musical”.
With music and lyrics by Dolly Parton, this is a hilarious musical comedy based on the hit movie.  It centres on three office workers who turn the tables on their sexist boss.
Country queen Parton opens the show direct from her executive pad in Dollywood!  Your correspondent is very much a Dolly fan, and this rip-roaring show hit the spot, providing a fine camp fix.
Anyone familiar with the 1980 film knows the plot sees three under-appreciated and overlooked female office workers take revenge on their sexist boss. The title track is the most famous and, fortunately, the stage show is well aware of its assets and kicks off with a reworked version of that very hit.
Like Parton herself, 9 To 5 The Musical is unpretentious, unashamed fun. It was never going to be high art, but what it does – uplifting “pink” friendly entertainment – it does well and that is in part down to music and lyrics by Parton.  The production is crisp and well-staged.
Jackie Clune  shines as Violet, long-overdue a promotion and leader of the trio, as they hold their misogynist manager hostage. Wry and ambitious, Clune’s Violet holds the show together.  Natalie Casey as newly divorced Judy provides great ‘quirky’ comedy.  Her “Get Out and Stay Out” solo is a highlight.  Amy Lennox sparkles as Doralee, the Dolly Parton lookalike, who wishes everyone could see past her blonde hair and huge boobs.   Mention also for Ben Richard’s comic genius as Franklyn J Hart, the kidnapped misogynist boss.
The cherry on the cake is Dolly herself, who descends from on-high (not in the flesh) to lead the cast and audience in song; bringing the house to its feet.  If you want a heartfelt, feel-good night out then this is the show for you.
9 To 5: The Musical.  Plays at the Opera House, Quay Street, Manchester to 24 Aug