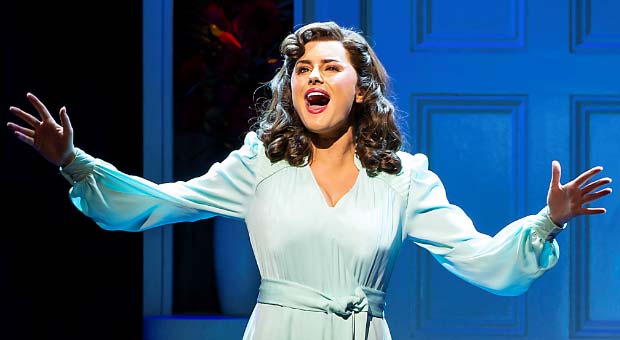 Dolly’s back in town!

OK, maybe not in the flesh, but she makes her presence known via video to narrate the stage version of the 1980’s hit film 9 to 5. As the face of the clock she rises high above the stage to introduce the girls, update us with where they are now and, of course, to belt out the classic title song. This is an hilarious, feel-good show about girl power overcoming sexism.

Louise Redknapp is Violet, the long-suffering office stalwart who knows more about the company than all the men put together; Amber Davies (Judy) is the new girl taking on her first job; and Georgina Castle takes on the iconic role of Doralee. Castle may be taller than her famous screen equivalent but has the balls and assets to be her match, as the girls take on the sexism of CEO Franklin Hart Jnr, smarmily played by Sean Needham. This slick touring production is stylish, bright and foot-tappingly good. There were a few sound issues on opening night, but the performances and vocals across the board ensured the evening went with a bang. The three leads smashed it, but Lucinda Lawrence also deserves a call out as the love-struck Roz – those legs!

This is a West End calibre big show with a big heart. As a remote worker, based at home I avoid the commute, gossip and corporate politics, but if what the girls achieve in 9 to 5 represents my local office, allocate me a desk now!