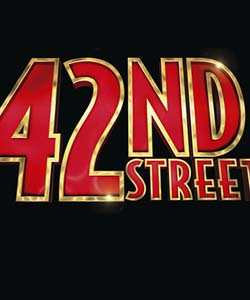 Your Canal Street Correspondent dusted of his tap shoes and perfected his shuffle-ball-change and time-step before skipping of to the musical 42nd Street at Manchester’s Palace Theatre on Tuesday evening.
The musical with a book by Michael Stewart and Mark Bramble, lyrics by Al Dubin, and music by Harry Warren, focuses on the efforts of famed dictatorial Broadway director Julian Marsh to mount a successful stage production of a musical extravaganza at the height of the Great Depression.  In doing so, small town Peggy Sawyer rises from chorus girl to Broadway star.


To be honest 42nd Street doesn't have much of a plot, and there is little to test the experienced cast.  The characters are all pretty one dimensional.  But, this touring (and very traditional) production directed by Mark Bramble does what you expect from a musical based on a Busby Berkeley movie.  There's sparkling costumes; there's tap - lots of tap (danced exceptionally); and timeless classic Broadway songs including "Keep Young and Beautiful", "Lullaby of Broadway" and "42nd Street" itself.
Jessica Punch as Peggy, deserves top billing, great voice, stage presence and what a tapper.  The top spots however are reserved for Dave Willetts (Julian Marsh) and Marti Webb (Dorothy Brock).

Experience shows, Willets has real stage presence, strong voice (as you would expect) and makes for a believable Marsh.  Webb makes much of the role of Dorothy Brock, the past her prime Prima Donna, renowned for inability to dance.  In truth, this is really only a supporting character.  Her rendition of "I only have eyes for you" is nevertheless a vocal highlight, as you would expect from an experienced and popular stage star like Webb.

Great support comes from Carol Ball playing Maggie Jones and special mention too for Graeme Henderson, playing Andy Lee, and James O’Connell playing Billy Lawlor the tapping tenor and leading man in the play within a play.
The ensemble looked great, the dance routines were well choreographed, traditional but punchy.  The singing was well projected.  It was nice to have a traditional band in a pit at the front of the stage, which played well under the direction of Gareth Williams.

All in all, musical theatre never used to be about a plot, but it would have been nice to have had some dramatic tension.  But that’s not what 42nd Street is about.  If you’re looking for an unabashed old-fashioned musical showing how a big heart can trump adversity, you’ve found the show for you.