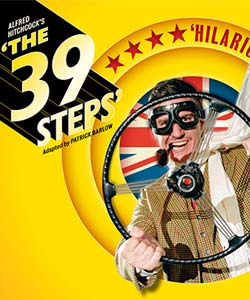 39 Steps at The Lowry

The publicity invites us to follow the incredible adventures of our handsome hero Richard Hannay, complete with stiff-upper-lip, British gung-ho and pencil moustache as he encounters dastardly murders, double-crossing secret agents, and, of course, devastatingly beautiful women.

Beware of posters emblazoned with the word ‘Hilarious’. Whilst full praise must go to the stage designer, technical team and director who ensure that the visual gags and madcappery of the evening fall perfectly into place, this silly, nonsensical production falls short of the mark. I love the quirky and absurd but this is a show a few years past its sell by date. The 4 actors have an hilarious time on the stage, however they need to remember there is an audience who would also like to be included in their in-jokes. It’s great to see a play that does not have the cast mic-ed up, but you need actors who can project their voices and speak with clarity. I overheard a number of people at the interval saying the same.

All in all, it was a pleasant evening with smatterings of hilarity but, compared with recent productions at the Lowry, this is the dud of the season.