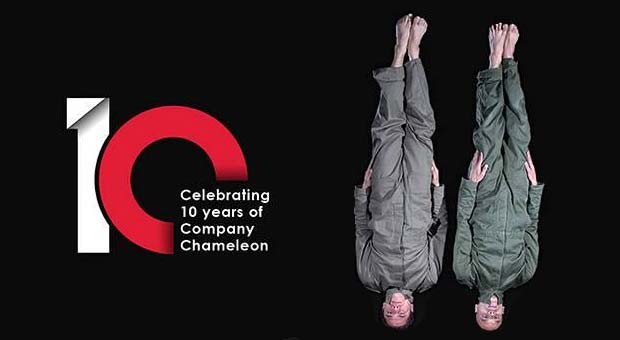 10th Anniversary at The Lowry

“10” (for 10 years on), which premiered at the Lowry’s Quay Theatre, is a trio of existing and new dance pieces, which last night included a bonus short opening piece, “Quest”, performed by Chameleon Youth. The other pieces are “Imprint” (new trio), “Trip” (new solo) and “Rites” (2007, duet) - which bought Company Chameleon fame way back then. Very positively, the audience included a large younger element.

Quest shows what can be done when youthful energy is channeled positively. The piece is part of the larger “Illuminate” sequence commissioned by Library Live, which explores literary themes from Inner Monster to Super Hero, and from Division to True Love. Quest starts with a small boy huddled up, who then comes out fighting, and is soon joined by about 20 others, one of whom was in a wheel chair, which certainly proved to be no barrier to his participation.

In Imprint (Kevin Edward Turner, David Colley, Maddie Shimwell) after the initial rather distracting strobe lighting Maddie is the star of the piece. It explores love and relationships and the imprint they leave on us. As the piece progresses we see happiness, sadness, togetherness and separation expressed, at times, with some force.

Trip (Theo Fapohunda) is a jokey and disjointed piece about self-deception. From the opening standup singer routine to the rather uneasy scatological references in the song which closes it, we see how too much belief in ourselves can be taken too far and we should just be happy with what and who we are. The dance is sometimes robotic, sometimes more flowing, but always convincing for the sentiments being expressed.

Rites (Kevin Edward Turner and Theo Fapohunda) is about boy becoming man and questions what masculinity is all about. Sadly, the piece is showing its age and the expected energy just wasn’t there, even though both performers ended up dripping in sweat. Some of the scenes are funny, some less so, and some brutal, but it was just a bit too disjointed. As we left, another member of the audience said he’d read the notes in the handout but couldn’t relate them to what he’d just seen. Quite.